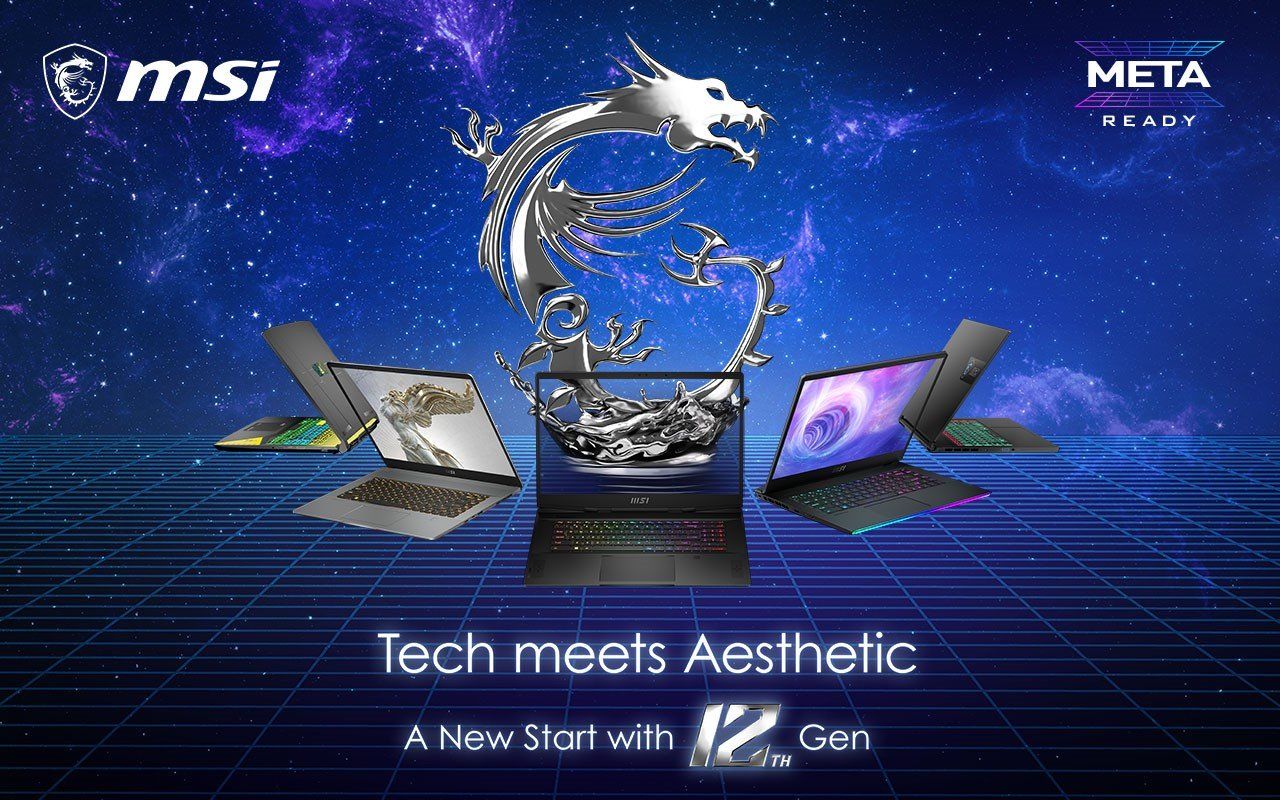 MSI revealed its new lineup of laptops equipped with the latest 12th Gen Intel H series processors. MSI demonstrated their determination and vision for the coming era of the metaverse. The new laptops boasting the Meta-ready logo are equipped with Intel Core i7 or above processors and NVIDIA GeForce RTX 3070 or above, for anyone who’d like to experience Metaverse-compatible performance.

NVIDIA GeForce RTX laptops are based on the revolutionary Ampere architecture, with 2nd generation RT Cores for ray tracing and 3rd generation Tensor Cores for DLSS and AI. The new GeForce RTX 3080 Ti Laptop GPU brings the flagship 80 Ti class of GPUs to laptops for the first time. Featuring 16GB of the fastest GDDR6 memory ever shipped in a laptop, the RTX 3080 Ti delivers higher performance than the desktop TITAN RTX. The new GeForce RTX 3070 Ti is up to 70% faster than RTX 2070 SUPER laptops and can deliver 100 frames per second at 1440p resolution.

The Vector GP Series was born with a new concept; the name “Vector” represents MSI’s expectation for the GP series to have all the power needed to move forward with a satisfying experience in gaming, engineering, or scientific computing. With Cooler Boost 5 Technology, the Vector’s performance can reach up to 210W via MSI OverBoost. Vector GP Series is now available in the UAE on a limited time bundle offer.

The award-winning Stealth GS series are the lightweight, powerful laptops for gaming and professional use. The GS77 comes with a new “core black” color and a more durable zinc alloy hinge. At less than 21mm for Z height, MSI managed to enlarge the touchpad and keycap size for a precise and comfortable typing experience. It is also equipped with six speakers for crisp treble and powerful bass. Business gamers will benefit from the webcam lock switch and support for up to100W PD charging for better security and mobility. Stealth GS 12th Generation is now available in the UAE on a limited time bundle offer.

MSI Raider GE series is the real eye-catcher, retaining the panoramic aurora lighting which creates an alluring sci-fi ambience. The performance is even more astonishing; with the innovative thermal design by MSI, the Raider GE series performance can reach up to a total of 220W with GeForce RTX 3080 Ti via MSI OverBoost. With displays up to 4K with the support of Discrete Graphic Mode, gamers will have a fast and smooth experience with the MSI Raider Series.

Crosshair GL series features a futuristic design with exclusive sci-fi elements inspired by the feeling and mood of gameplay, and the comes equipped with latest 12th Gen Intel Core processors and Cooler Boost 5 Technology. The graphic performance is at a maximized level – setting the Crosshair series apart from its competition. Crosshair GL Series comes in two variants: Crosshair 15 and Crosshair 17.

The MSI Pulse GL76/66 keeps the design features by Maarten Verhoeven along with the titanium power-armor inspired by Pulse energy for the Dragon Army to enhance agility and flexibility. Cooler Boost 5 increases airflow by 15%, even with a 33% reduction of wall thickness.

The MSI Katana series boasts a new knight image with magical immortal force – “Dragon Power” – wielding an enchanted sword of victory. This knight character was created by Justin Goby Fields, a famous concept artist from the United States. Katana series is set to help gamers succeed with a comfortable key travel at 1.7mm and Cooler Boost 5.

The Creator Z17 is the world’s first 17-inch laptop to support pen touch, and features the 16:10 screen ratio with a thin bezel design and True Color Technology to be the perfect companion for creators to achieve more. The Creator Z16P has an extra 20% performance boost with Vapor Chamber Cooler, which generates 76% extra more cooling area, 65% more airflow, and decreases surface temperature by 2°C(3.6°F). With competitive performance and a CNC-milled aluminum chassis, the Creator Z Series are Studio laptops built for creators, inquisitive professionals, or consumers who enjoy high-quality, premium products.

The Creator M16 is a more portable and stylish choice for students or creators with the need for a powerful performance. It features a QHD+ True Pixel display that lays flat at 180° and an ultra-light, slim aluminum chassis.

MSI Center software has also been updated with the intention of creating the smartest laptops ever. MSI Smart Auto will auto switch the suitable modes depending on your usage, while Ambient Silent AI will detect ambient noise level (dB) to adjust the fan speed, giving you better performance with a relatively silent fan.

MSI’s new Gaming and Content Creation series provide persistently powerful performance, innovative thermal solutions, and a bevy of new features, with MSI’s signature aesthetic touch. The new gaming laptop lineup features a significant performance improvement over previous models, including up to 30%~45% increase in CPU performance. The MSI-exclusive cooling helps fully release the power of the new 12th Gen Intel processors. It provides a solution that is as efficient as liquid metal, but safer and more reliable.