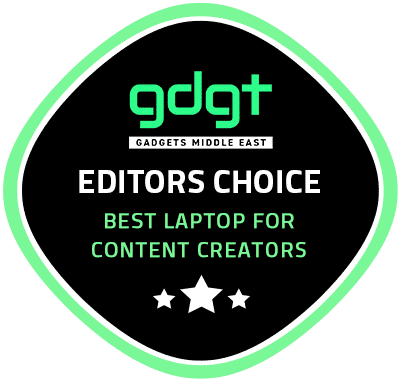 The real show-stopper here is the Mini-LED 4K display.

First unveiled at CES 2020, the MSI Creator 17 is the world’s first laptop with a mini-LED screen along with powerful hardware for content creators and gamers alike. It is the successor to last year’s Creator 17m.

Mini-LED screens are LCDs, but offer some advantages over traditional LED backlighting. The individual LEDs are smaller, so more fit behind a panel. As a result, Mini-LEDs provide deeper black levels and better contrast ratios compared to conventional LCD screens. Mini-LEDs screens are also able to achieve higher brightnesses of up to 1000 nits.

Our review model, MSI Creator 17 A10SF, has the following specifications:

The model we received for this review is the MSI Creator 17 A10SF.

The whole package comes in a brown cardboard box as usual with the MSI logo on the front and back. The charger is in a separate white cardboard box, while the laptop and the manuals are in a much nicer looking MSI branded box with the dragon logo. Inside the box you will find:

Apart from the size, the laptop has a simple and elegant design that won’t attract much attention. Featuring a subtle silver-aluminum finish with just a small MSI logo in the centre, the lid looks very classy.

Despite the sturdy lower base, the lid is easily bendable even with just a small force, especially at the base of the display.

The Creator 17 has a compact housing measuring 396 x 259 x 20 mm weighing only 2.5 kg, very reasonable for a 17-inch model, which makes it portable enough for work.

The laptop also undergoes MIL-STD-810G tests, a military-grade durability certification, that guarantees it reliable and durable against drops, vibrations and extreme weather.

At the back and below the base are the diamond-cut ventilation grills for cooling and better airflow.

The Creator 17 offers a great number of ports and connectivity options except for a standard SD card reader.

On the left side are ports for power adaptor, Ethernet, 1x Type-A USB 3.2 Gen1, microSD, an audio jack, and a mic-in jack.

In terms of connectivity, there is Wi-Fi 6 and Bluetooth 5.0 on board.

The head-turner on this laptop is its display. It has a stunning 4K UHD 60Hz screen and is the first in the world to implement the Mini-LED technology.

Up until now, backlit screens on modern laptops used to have conventional LEDs that are 2-3mm in size, limiting the density and brightness of the backlighting. With Mini-LEDs, the width can get as small as 0.1mm, allowing for a much higher LED density.

According to MSI, the display is packed with 5,570 LEDs into a 240-zone array inside the TruePixel display. And as the Creator 17 is meant for content creators, each laptop comes CalMAN color-calibrated by default.

In short, Mini-LED tech offers higher brightness, higher contrast ratio and better color accuracy than most other high-end laptops. The display also proved to be outstanding during both outdoor and indoor use.

The matte screen has an anti-glare coating and the viewing angles are good both vertically and horizontally. The bezels are narrow. On the top bezel is the webcam and built-in microphones and the MSI logo at the bottom.

If you are mainly going to use this laptop for gaming, we recommend the FHD 144Hz display variant which sacrifices Mini-LED tech for better framerates and higher refresh rates.

The Creator 17 has a full-size, single-color RGB, chiclet keyboard complete with a numpad. The power button is separated from the keyboard and is placed right above the speaker grille. Typing felt good and while the single-color backlit keyboard glows only in white, it’s a great feature when working in dark rooms or working late.

The touchpad is wider than standard and also includes a fingerprint reader on the top left which can be used instead of the IR camera for Windows Hello. Fingers slide smoothly on the surface and gestures are accurate and quickly recognised. However, the trackpad buttons do produce an audible click when pressed.

The Creator 17 with Intel’s new 10th-gen ‘Comet Lake H’ processors paired with Nvidia’s GeForce 2070 Max-Q 8GB GPU, 32GB of RAM and 1TB of SSD offers great performance. This laptop should offer solid performance for at least the next couple of years.

Let’s take a look at the CPU-Z for the processor details:

While Intel says the chip can push up to 5.1 GHz on a single-core, this is only possible with what Intel calls ‘Thermal Velocity Boost’. This, essentially, gives the processor 200 MHz of extra frequency when running below 65C and 100 MHz when running below 85C. If the CPU isn’t running cool, the actual maximum frequency tops out at 4.9 GHz.

The Creator 17 is also equipped with a dedicated GeForce RTX 2070 Max-Q GPU with 8GB of GDDR6 memory.

The GeForce RTX 2070 Max-Q is the energy-efficient version of the desktop version and is specially designed for thin, portable laptops.

Next up, we have 3DMark benchmarks:

While the 2070 Max-Q can play most games with respectable framerates at the native resolution of 3,840 x 2,160 on medium settings, the experience is much better at FHD resolution as it can run even the latest games on ultra or very high quality settings.

Storage is handled by a M.2 NVMe SSD manufactured by Western Digital with a capacity of 1TB that offers good performance, and can be expanded further with another M.2 SSD and/or a SATA drive.

The SSD offers good performance with read speeds of up to 3300MB per second and write of up to 3100MB.

The laptop is relatively cool and taking into account the powerful hardware, it is also relatively quiet.

In real world usage, The Creator 17 is quiet during idle mode or light usage such as web browsing or video playback. During heavy load, the noise does get louder but not as much as a gaming laptop.

During our benchmarks, the area above the keyboard did get really hot (that’s where the heatpipes are located), but the keyboard and the palm rest areas remained cool.

In terms of upgradability, the Creator 17 offers two RAM slots, upgradable up to 64GB. For storage, our model had a 1TB SSD, but has slots for two M.2 2280 SSD Combo ports (NVMe PCIe Gen3 / SATA), should you need more storage space in the future.

The Creator 17 has 2x 2W Duo Wave Speakers using Dynaudio sound system, located on both sides of the laptop. The sound quality is average but loud and crisp.

The 82Wh 4-cell Li-Polymer battery is quite good and was able to run for about 6 hours straight with the screen set to one third brightness and in balanced mode (without Wi-Fi). This is a really good number considering the 17 inch 4K screen and the powerful internals.

Based on the activity and screen brightness, the Creator 17 lasts between one to seven hours. When browsing the internet, you can expect around 4 hours of battery time.

The Creator 17 is the world’s first laptop to feature a Mini LED display that meets the HDR 1000 standard, making it ideal for film makers, photographers and those who work in creative professions.

The Creator series are MSI’s top-of-the-line content machines. While internal hardware are similar to those of the high-end gaming laptops, the display is what makes the difference.

Although it may not be very portable due to the 2.4kg weight and the 17-inch screen; on a fixed location such as your office or home, it works almost as good as a powerful desktop machine.

The real show-stopper here is the Mini-LED 4K display. Props to MSI for being the first in the world to launch the Creator 17 with its spectacular Mini-LED display tech, we hope other manufactures follow suit and we usher in a new era of display technology.

The Creator series are MSI’s top-of-the-line content machines. While internal hardware are similar to those of the high-end gaming laptops, the display is what makes the difference.