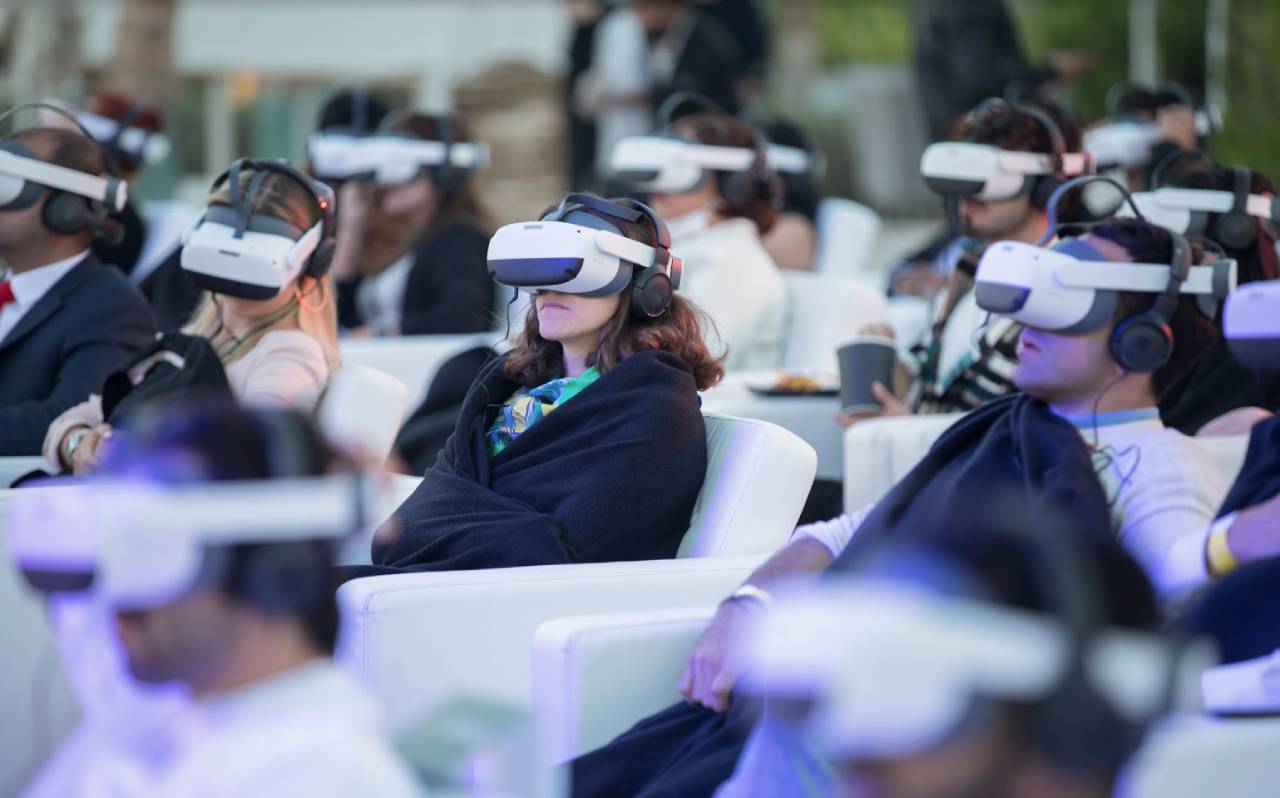 MContent has announced the arrival of the Cineverse to the world whereby they aspire to bring Cinema to people anywhere, anytime – MContent and their launch was enabled due to a collaboration with PwC Middle East emerging technology teams.

Last night, a high-end launch event was attended by notable guests at Palm Jumeirah Dubai where MContent premiered their original co-productions titled “Ripple vs. SEC Saga” and “El Salvador vs. World Bank”. The Cinema premier however was different from the norm as participants were seen glaring at the ocean sitting at a beach wearing their virtual reality (VR) headsets engaged in an immersive Cineverse experience.

Speaking at the event, Umair Masoom, Founder & CEO of MContent said, “The immersive cinema experience – designed in collaboration with PwC and showcased to our guests today has global scalability & mass adoption capability. By bringing the Cineverse to a global audience, MContent wants to increase funding & screening opportunities for thousands of independent film makers globally. As part of the decentralised ecosystem, MContent is launching the first-of-its-kind, fully monetised content consumption platform, aiming to drive sustainable earnings for content creators and viewers. I would like to thank our Co-Production Partners “Insight TV” & “Villain Studios” from Netherlands, our technical support teams in “PwC Middle East and PwC UK” and our investors including “Gargash Group” and “Daman Investments” for helping us bring the Cineverse to life today”.

Reza Essop, PwC Middle East’s Emerging Technology Leader believes that “This is a brilliant example of the region’s movement towards digital transformation and is very much in line with major wider initiatives such as Dubai Vision 2030. MContent has defined a practical application of emerging technology with the convergence of blockchain, NFT and extended reality (XR). We are incredibly proud to have facilitated this effort as well as enabled this vision from concept to reality and to a sustainable commercialised economy that can benefit many as well as lead the way for other out-of-the-box efforts”.

The premier event was attended by GCC business community members, celebrities, film makers, influencers, NFT artists, movers & shakers, blockchain enthusiasts as well as some senior members of the Gargash Group who all became the first to experience the MContent Cineverse at the beach in virtual reality with two distinct original productions.

Also present at the occasion was Dr. Lamees Hamdan, leading Emirati entrepreneur and global opinion leader who recently accepted the position of Chairperson at MContent. On the vision of MContent Dr Lamees comments, “I love the disruptive nature of MContent, the ability of helping peoples dream become a reality. Where before there were barriers, and it was almost impossible for a small creator with big dreams to access production, studios and funding, at Mcontent we are giving the control back to the creators, where all of us are funding our own destiny and that is power. What we are seeing today is a manifestation of this new reality we are creating together”.

The native token of MContent is currently trading at a Market Cap of over $100 million on more than six centralised and decentralised exchanges & the platform plans to fund 100 global projects by the end of 2022.

PwC has implemented and advised organisations across all industries on virtual reality (VR), augmented reality (AR) and blockchain technology, the fundamental components of the metaverse. The firm has also invested in virtual real estate on the metaverse platform The Sandbox and uses virtual world technologies to solve business problems. Jeremy Dalton, Head of Metaverse Technologies for PwC UK, said, “We now have a more immersive way to experience virtual worlds and a transparent way to transact within them. The convergence of VR, AR and blockchain to enable the metaverse concept has created opportunities and challenges for businesses across a number of industries”.