First ever edition of EMG 2022 will bring the best of gaming culture and entertainment to Dubai; US$250,000 up for grabs in the pro-level GET Dubai CS:GO tournament. 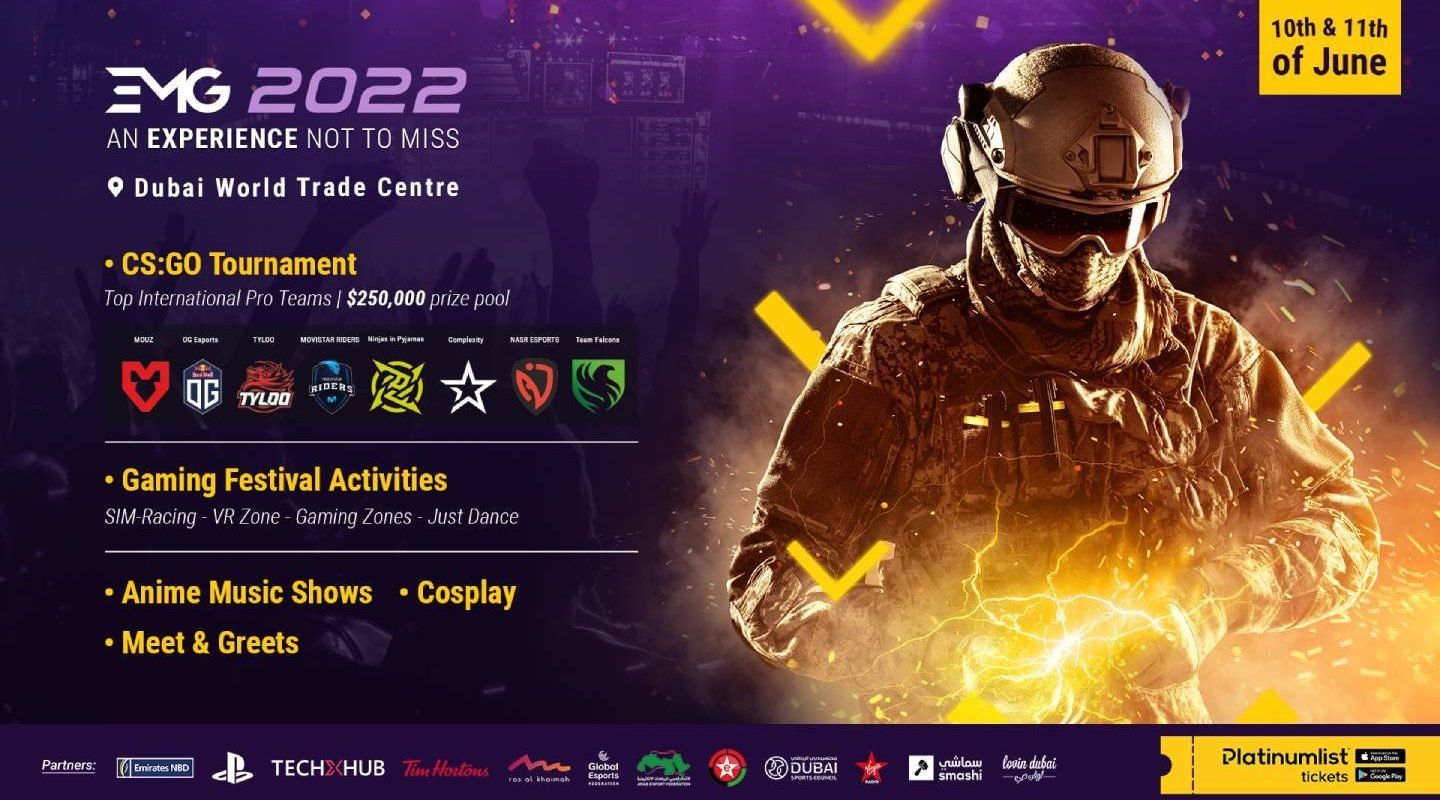 EMG 2022, which will be held at the Dubai World Trade Center and will feature a vast range of gamer culture activities, including esports tournaments, celebrity guests, friendly competitions, anime music shows, cosplay shows, and more.

The festival will take place from 10-11th June, and features the official Global Esports Tour (GET) CS:GO LAN tournament with a grand prize pool of US$250,000.

“We are delighted to bring the GET CS:GO Tournament to Dubai as part of the EMG 2022 Festival. It is a milestone in Dubai’s journey to becoming a global esports destination, and we are very excited to be hosting such an outstanding lineup of professional esports talents and outstanding gamer entertainment,” said Abdulla Al Gurg, founder of EMG and Vice President of the Emirates Esports Federation. “This is the first edition of EMG, and we look forward to celebrating and bringing together esports, gaming and anime fans in the UAE annually for years to come.”

The esports action will kick off virtually on the 9th of June, with eight professional esport teams from around the world competing in the quarter finals of GET Dubai CS:GO Tournament. Teams including Ninjas in Pajamas, Mouz, NASR ESPORTS, Falcons, Complexity, OG, Tyloo and Movistar Ride will battle for the prize pool of US$250,000. Esports fans will be able to follow the tournament via EMG’s official Twitch and YouTube channels.

EMG 2022 officially opens on the 10th of June and will host thousands of audiences till the 11th of June at the Dubai World Trade Centre, welcoming everyone to witness the high octane semifinals and the grand finals of the GET CS:GO Tournament, along with a massive lineup of gaming entertainment, including friendly video game competitions across several venues dedicated to different games, including League of Legends, Valorant, Call of Duty, Fortnite, FIFA, Tekken 7 and multiple VR games. Attendees can purchase their tickets through the Platinumlist.

Cosplayers will be able to participate in EMG’s cosplay contest, with a chance to win a share of the US$10,000 prize pool, and even better – attendance to EMG 2022 is free for all pre-registered cosplayers.

Attendees will also be able to enjoy the performances by famous Japanese pianist Animez and Japanese singer Akeboshi. The two-day festival will include meet-n-greets with Animenz, Akeboshi, and the esports teams, as well as some of the most popular influencers, including but not limited to MSDossary, Ahmed Ben Chaibah, TM Faisal, Bo3omar, SirSAN, Mark Tube, Kakashi Gaming, Hope Rima, and more.

Completing the EMG 2022 lineup will be a wide selection of official merchandise stores from top gaming teams and players.